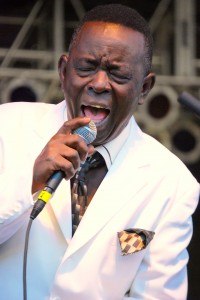 Charles Walker was born in Nashville, Tennessee on July 12, 1940. Charles or “Wigg,” as he is known by his friends (his mother nicknamed him when he was born with a full head of hair), began singing at an early age in church and school. He cut his first record in 1959 for Ted Jarrett’s legendary Champion label. One cut, “Slave To Love,” was credited to Charles Walker and the Daffodils. In fact, there was no such group as the Daffodils. The backup singers on the record were label mates the Kinglets and Larry Birdsong.

In 1960, Charles moved to New York City where studios and nightclub work were plentiful. 1962 found Charles recording with Chess Records out of Chicago, and soon he signed on as lead singer with the J.C. Davis Band. This band began touring the country opening for the greats of the era including James Brown, Jackie Wilson, Etta James, Wilson Pickett, Little Willie John, Otis Redding, and Sam Cooke. The J.C. Davis Band recorded some real barnstormers for Chess like “Sweet Sweet Love” and “The Chicken Scratch.” In 1964, Charles formed his own group, Little Charles and the Sidewinders. They became one of the most in demand soul bands in New York City’s nightclub scene, performing at the Apollo Theater, Small’s Paradise and venturing out to Las Vegas and Atlantic City. They subsequently recorded for Chess and Decca labels. The Sidewinders stayed together through the 60’s, and in 1969 Charles cut some sides for Botanic Records. The Sidewinders reformed in 1973 and worked as a show band in hotels, nightclubs, and casinos without the benefit of a recording contract. In 1979, Charles signed on with Motown as a staff writer.

Early in the 80’s, Charles recorded in England and re-issued many of the Sidewinders classic sides. Realizing that there was a market for soul music in the U.K., he formed his own label P.R.G. and released the single “See Me” in Europe. Charles spent most of the 1980’s in England and Spain and worked steadily and recorded occasionally, but this wasn’t enough. In 1993, he moved back to Nashville to do some serious recording, since Nashville’s blues and R&B scene was really booming. His solo releases include “I’m Available,” “Leavin’ This Old Town,” “In the House” (live with Johnny Jones) and “Soul Stirring Thing.” He also released an album on the U.K. label Zane records called “Number By Heart” in 2003.

Charles most recently was the featured singer for a band called “The Dynamites featuring Charles Walker”, and three records were released since June of 2007 on Outtasight Records. The band toured frequently in the U.S., Canada, Europe, and Australia.

Charles is one of the few remaining original soul singers from back in the day when old school R&B/soul was brand new on the music scene. There has recently been a resurgence of this style of music, and it is finding a younger audience while rekindling memories for the old school crowd. Wigg is still delivering this style of music at a very high level, and his experience and maturity in the field of soul music gives him a perspective that is unmatched.

No shows booked at the moment.